When students are asked to debate as a class there is often a lot of excitement from some!
However, structuring an effective debate where all students participate and learn well from one another is difficult.

Divide students into teams by asking them to create a continuum based on their knowledge of the topic right now. See here for more info.

Then pose the question to the teams. Display this large/on your board.
Set a clear time frame for the initial discussion. Leave this open to the students to talk through all areas of this issue.

Be clear which team is FOR or AGAINST the motion/argument set.

Teams must then create their opening comments/statement. They must summarise their main arguments without expanding on any of the points. Ensure all students have their voices heard by stating that a sentence must be offered by every member.

Then state EVERY member has to write their one point/argument- either for/against on the post it note/card provided.

Then let the debate begin. Once the opening statements has been read out- allow each team another set time to reevaluate their arguments written on their post it notes. Students can re-write them or edit them.

One by one with the organisation of the 'speaker' (person in charge in the debate- could be the teacher/student) the teams must present their points written on their post it notes. There should be a chance for others to respond at will too. Once the point has been 'decided,' the team who wins it, takes the post it note.

Scores at the end of the debate are calculated by the team with the most post it notes!

During the debate provide a resource for students to record key facts/important points etc.

Place the reluctant speakers as members of the audience who provided with a checklist can score the people debating?

Allow some research time before the debate? Computers? iPads? Phones?

Track the debate in the class by passing a ball of string to whoever that speaks. You will then be able to see visually where the arguments have been taking place. 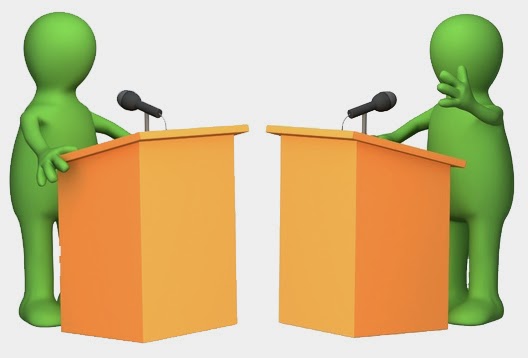